339 West 29th St/Hopper-Gibbons House is featured in NY Times article about the challenge of preserving homes tied to the Undergound Railroad !

This past Sunday (Feb 24) the NY Times published an article on the challenges of preserving homes tied to the Underground Railroad, featuring 339 West 29th Street, i.e. the Hopper-Gibbons House. Below is a quote from the article. For the full article please go to:http://www.nytimes.com/2008/02/24/nyregion/thecity/24slav.html?ref=thecity 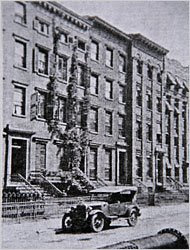 ONE balmy day last April, an art and architecture historian named Fern Luskin hauled her laptop and a collapsible chair up to the roof of the Chelsea town house where she lives to work outside for a while. From the top of her building, on West 29th Street near Eighth Avenue, the view to the south is dominated by the bulky towers of the Penn South apartment complex. To the northeast, the Empire State Building pierces the sky.

But on this particular day, neither the panorama nor her laptop could distract Ms. Luskin from the scene unfolding three doors over, where workmen were attaching long steel beams and poles to a neighboring rooftop. It was the beginning of what she correctly assumed was the construction of a vertical addition to the nearby building — in other words, a penthouse.

Ms. Luskin, a professor of art history at La Guardia Community College, was distressed. Her trained eye relished the uniformity of the row of five town houses that included both her building and the one at No. 339 being readied for construction. The addition, she feared, would be what she described as an “aesthetic disturbance.”

After learning that the town houses were built in 1847, more than 50 years earlier than she had thought, Ms. Luskin decided to delve into the past of No. 339. For two months, she combed through historical archives and databases, and she discovered that No. 339 was apparently Manhattan’s first documented safe house for escaped slaves — a stop on the Underground Railroad.

Uncovering the story became something of an obsession as Ms. Luskin pieced together clues about the lives of Abigail Hopper Gibbons and James Sloan Gibbons, well-known Quaker abolitionists who lived in the building in its early years.

“It got so exciting,” Ms. Luskin said, “I couldn’t stop.”
After finding a period map that linked the Gibbonses to the house, Ms. Luskin discovered a passage in a letter published in a biography of a renowned 19th-century lawyer named Joseph Hodges Choate describing a meal he ate at the house with a young escaped slave who was fleeing to Canada.

Though buildings throughout the city are often thought to have been part of the escape route north, finding documents that provide proof is extremely difficult. “It’s incredibly rare that you can substantiate it,” said Andrew Berman, executive director of the Greenwich Village Society for Historic Preservation. “Locations were secretive by their very nature.”

Despite the documentation Ms. Luskin collected, No. 339 could not originally be considered for designation as a landmark because a building permit had been issued for the construction project. However, construction is at a standstill; according to Kate Lindquist, a spokeswoman for the Department of Buildings, the permit for construction of the penthouse is being revoked, in part because an agency review determined that the architectural plans did not comply with building and zoning codes.

The Landmarks Preservation Commission is currently evaluating No. 339 to see if it is eligible for designation as a landmark, news that will no doubt delight some local residents.

“Being one of the few African-Americans on the block, I have an emotional connection to this history,” said Curtis Jewell, a 55-year-old truck driver for the Postal Service who has lived in Ms. Luskin’s building for 10 years. “You have a lot of cultural history in New York that money seems to want to push out of the way.”

Posted by LamartineChelsea at 2:54 PM No comments: