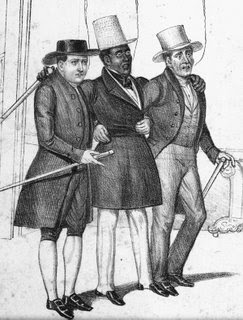 Although it sounds strange, not all white abolitionists worked with black abolitionists. The Hopper-Gibbons family were a noteable exception. In the cartoon from the time that is above we see Isaac Hopper in Quaker Garb, with noted NYC black abolitionist David Ruggles (David Ruggles--the country's first African American bookseller, founding secretary of New York City's Vigilance Committee, assistant to over 600 fugitive slaves including Frederick Douglass--joined them in 1842.) and to the right is Barney Course who assisted many fugitive slaves escape to freedom.

David Ruggles was known as one of the most "notorious" black abolitionists in the United States. Below is a description of a remarkable incident, which took place right around the time Frederick Douglass arrived in New York City, which reveals the energy and courage demanded of Ruggles as he used his pen and life to fight against slavery. The Darg Case, as it was called, caused a furor in New York’s newspapers in the autumn of 1838. Its proceeding exposed the extreme dangers for Ruggles and other anti-slavery warriors.

We look forward to the upcoming biography of David Ruggles by Colgate Professor, Graham Russell Hodges, the working title of which is A Whole-Souled Man: David Ruggles and the Rise of Radical Black Abolitionism.

IMAGE OF COMMEMORATIVE PLAQUE AT 36 LISPENARD ST., MANHATTAN, where David Ruggles sheltered Frederick Douglas when he first arrived in NYC.

New York City residents in the 1830s were deeply divided over the future of America’s peculiar institution. It was naturally abhorred by the city’s 16,000 black residents, many of whom had been only recently emancipated by legislative decree ending slavery in New York state in 1827. Much of the city’s elite also worked against it, though by different means. Some elite urbanites favored the strategy of the American Colonization Society, with its plan of sending free blacks back to Africa. Others, notably the Jay family, preferred black self-help efforts at home and donated money to the New York Manumission Society and its principal agency, the African Free School. Though the school had declined recently, it was the alma mater of the city’s black elite. A more radical wing of the Manumission Society sided with immediatists—anti-slavery activists such as William Lloyd Garrison and the Tappan brothers, founders of Dun and Bradstreet—who wanted slavery ended now, not later.

One of the most active Manumission Society members with this view was Barney Corse, who, for more than 10 years, had helped self-emancipated or fugitive slaves come north and helped local blacks protect their freedom against kidnappers. Joining him was the venerable Isaac T. Hopper, a Quaker abolitionist since the 1780s, and Ruggles. This trio had successfully battled city officials and kidnappers on several occasions. At other times, when they lost, Ruggles used his press to blast this unfair system. Some situations were uncomplicated; others, such as the Darg Case, were complex. The facts, as they came out in the subsequent trial, were as follows: On August 25, 1838, John P. Darg, a Virginia slaveholder, arrived in New York City with his slave Thomas Hughes. The issue of Southerners bringing their human chattel to a free state was under intense negotiation between the governors of New York and Virginia, but Darg apparently felt confident about the status of his servant. But a few days later Hughes came to Hopper’s house, seeking refuge. The Quaker, however, was initially reluctant and asked Hughes to leave his home. The next day, the New York Sun, the most vitriolic of the penny press, published a notice offering a reward for the return of Hughes and the $7,000 or $8,000 he had taken with him. Hopper, Corse and perhaps Ruggles served as go-betweens for Darg and Hughes. The slave no longer had all the money, having given some of it to others who helped him escape and a portion to some local gamblers.

Corse and Ruggles decided that returning the cash was moral but turning over Hughes was not. They convinced Darg to free Hughes provided that he gave back as much money as he took. When the sum turned out to be far less than Darg demanded, the slave master ordered Corse and Ruggles arrested for grand larceny. Corse quickly found bail, but Ruggles was jailed for two days with common criminals, even though he had not actually been charged with anything. After that incident, a caricature of the three, entitled The Disappointed Abolitionists, was published, suggesting that they were really interested in the reward and, rather than trying to free slaves, were setting up an extortion ring to prey on unwary masters.

The case remained newsworthy over the next few months. In October, a group of black citizens honored Ruggles by giving him a cane with a golden knob. Sadly, the struggle was taking its toll on the valiant Ruggles. Now only 28 years old, he was nearly blind and was afflicted with severe bowel disorders. All of his money and time went into the movement, so he often was homeless. Worse afflictions were on the way, and they came from a surprising source.

In 1837, Samuel Eli Cornish, aided by Philip A. Bell, resurrected his black newspaper and renamed it the Colored American. Ruggles quickly became a regular contributor. The editors in turn frequently wrote approvingly of his actions. But in early 1839, a terrible dispute arose that ended Ruggles’ career in New York City. Hearing rumors that a black hotelier named John Russell was hiding captive blacks before they were transported south, Ruggles, without Cornish’s knowledge, inserted an article in the Colored American accusing the innkeeper of helping kidnappers. Russell sued the newspaper, Ruggles and Cornish for libel and won a judgment of $600—which nearly bankrupted the weekly journal. Furious, Cornish attacked Ruggles in print. Although wealthy benefactors soon paid the libel award, Cornish campaigned to have Ruggles driven out of the movement. One method was to demand that Ruggles explain every cash expenditure of the Committee of Vigilance. After a careful accounting, it appeared that the committee’s funds were short $400. Broken in health and deeply hurt by Cornish’s accusations, Ruggles was forced to resign his post as secretary of the committee. Before doing so, he published his last imprint in New York City, A Plea for a Man and a Brother, in which he tried to refute Cornish’s indictments. In truth, the more conservative Cornish and his many allies had tired of Ruggles’ radical methods and sought less confrontational means to fight slavery.

We look forward to the upcoming biography of David Ruggles by Colgate Professor, Graham Russell Hodges, the working title of which is A Whole-Souled Man: David Ruggles and the Rise of Radical Black Abolitionism.
Posted by LamartineChelsea at 11:31 AM No comments:

There is no more serious case of a gravely imperiled, historically important building in NYC, than the former Hopper-Gibbons home at 339 West 29th St., which is the only documented Underground Railroad Station in Manhattan. We continue to urge all historic preservation agencies and organizations to add this site to their lists of endangered historic buildings.

The building currently has no roof, which is a fire hazard as has been reported to the inspector of the Fire Department (with no result)and has already caused water damage and provided a place for pidgeons to nest! In addition, the scaffolding and/or tarp, besides being an eyesore, is disintegrating and can endanger passersby. Because the owner started to construct one and a half stories without adhering to building and zoning codes and, as a reult, had their building permit revoked, the steel I-beams they erected (as well as the hazardous scaffolding), must be torn down and the original roof of the fifth floor which they destroyed, needs to be reconstructed ASAP.
Posted by LamartineChelsea at 11:21 AM No comments: